Thermal expansion is an important operating parameter of pipeline systems. It is caused by excitation of movements of atoms constituting a given substance as a result of thermal energy supply. This results in linear expansion of the material. Incorrectly adopted compensation of this parameters in the operated system may lead, among others, to excessive stress in the pipe, cracks, misalignment and even leaks leading to pipeline damages. To prevent this phenomenon, following steps may be undertaken:


Considering the production process of TERMOTECH system, it should be noted that the conduit pipe, sleeve pipe and the foam filling the space between these pipes form a uniform piping system for which the thermal expansion for design calculation purposes is as follows:

Prior to commencement of pipeline thermal expansion calculations, a very important question should be asked: "What is the temperature at which the pipeline will be erected?" This temperature is the basic temperature in reference to which the ΔT for two variants shall be calculated.

The pipeline is not in operation but is subject to action of external factors (extreme possible high and low temperatures should be considered).

The pipeline is in normal operation; the temperature of the medium to be flowing in this pipeline should be considered together with the influence of external factors on the entire "system".

Materials to be tested are as follows: 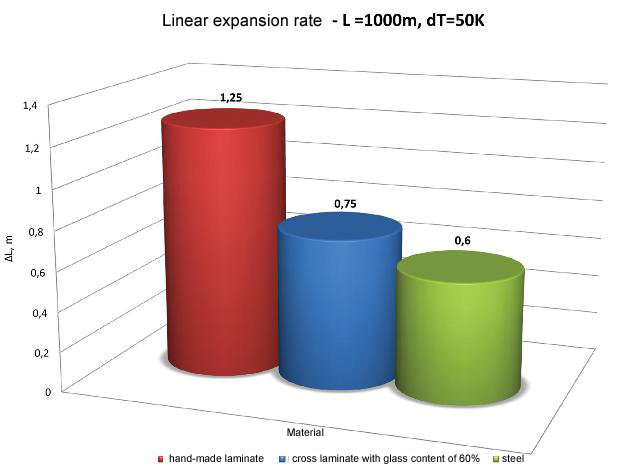 If our goal is to obtain good thermal expansion values, the steel pipeline is an acceptable solution. However, due to durability, resistance to corrosion, resistance to chemical agents and atmospheric conditions, GRP pipes are much better than steel pipes. It clearly follows from the above diagram that linear expansion for GRP pipes is only slightly higher than steel pipes.
Laminate pipes can be installed in a  self-compensation system, as the largest allowed deformations for a 1000 m pipeline cannot exceed 2.0m, i.e. 0.2%. In connection with the above, when rebuilding pipelines, the existing supporting structures can be used.